Skip to the content
STRUGGLING WITH PROCRASTINATION?
Get your FREE copy of the eBook where you'll find 6 practical strategies to beat procrastination FOR GOOD.

Here are few tips to consider applying to be able to enjoy tasks that you hate to achieve your goal:

The truth is most of the things we must do in life aren’t enjoyable at all.

Just think back about everything that you did throughout your life, and you’ll know what I’m talking about.

That’s clearly why a lot of people procrastinate and have a huge problem with it.

We all experience this kind fretting temptation to just put off whatever the task in front of us, because it doesn’t feel right, or I’m not into it.

The best thing you can do is break the task or the project down into small achievable goals.

Pomodero technique is a great way to implement this strategy. I’m sure you already have heard of it, but did you ever consider applying it?

Pick this fretting task that you’d like to do, estimate how many hours it will take you to end it, and let’s say you found that it will take you 1 hour, break it down into 5 sessions, which comes up to 12 minutes each.

Know it’s going to be less intimidating to take action on a task of 12 minutes than doing it for a complete one hour. You simply divide the effort throughout time.

Tip #2: Bundle The Task With The Thing That You Love

Instead of delaying the reward afer accomplishing the task, this strategy recommends the opposite. Make the reward immediate in the beginning of the task, and while you are doing it.

Many of us do that, but we aren’t conscious by it.

Also you can combine doing the task with your favorite place, that’s also a tricky way to bring some enjoyment while you are working.

For me, in order to make the habit of reading less daunting, and enjoyable, I bundled it with coffee, or going to coffee shops.

I did the same thing with walking. There’s a park few blocks from home, with a lot of greenery, and it’s a place that I immensely love.

So, walking there is effortless.

What makes video games so addictive? One big component of it, is because the progress that you’ve made into unlocking this feature, or getting rewarding by some kind of prize.

What is last thing that you became bored with a video game? Simply because there’s no progress, no improvements, no challenges.

The reason why I gave this example, because I was an ardent gamer to the bones, and I was so addictive to them that I screw my life over for a while.

And when I started learning about psychology a bit, they are using it against you, because the more you play, the more money they make.

And I did that with the habit of being thankful to my Creator. I have a whiteboard in my room next to my bed, and I use it track how many days I’ve gone with it.

Just that, as simple as it seems, was addictive, because our brain love progress, when you see yourself how far you went with the thing, you want to do more of it.

So know you gripped your brain to your side, because you works will it laws, rather than working against it.

Another way to lessen the burden of doing certain tasks that aren’t delightful to you, is simply to see the other side of the spectrum.

We often attach certain things with willpower, sacrifice, and resilience. Those things require work, effort, and devotion, and lot people of are frightened by that.

For example, instead of attaching saving money with the sacrifice needed each month to do it, why not to link it to the financial independence that will get from it in the future.

Having hard times to study? Instead of thinking how tedious the task is, think about the grades that will allow to get access to great universities, and thus have a huge pay in the future.

STRUGGLING WITH PROCRASTINATION?
Get your FREE copy of the eBook where you'll find 6 practical strategies to beat procrastination FOR GOOD.

Get your copy of "Procrasination Killer Checklist" to beat Procrastination FOR GOOD, It's FREE, you HAVE NOTHING TO LOSE, IT'S COMPLETELY FREE... 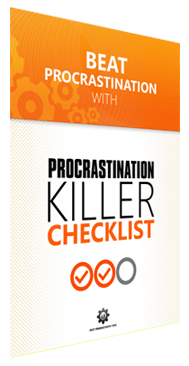